To catch up with the first episode click here

But the next day Dad chose not to bring up the topic. He rather had other plans for me. That evening Dad gave me a ride to my classes. That is when he discovered a new and safer way back home; at least he thought so.

The party is over now… finally, and I am the one walking out of the class first. I so much wished, If dad could come to pick me up today; which he did for over two months after the incident. But he has his other priorities, responsibilities to be taken care of. So I am to make my way alone to the classes. For a few weeks, the newly discovered gully felt safe and easy. But the tea stall recently put up on the corner has grabbed enough popularity making it the favorite spot for those badgers.

With all these thoughts in my mind, I never realized I am there, the most dreaded place. It is dark and almost empty. My heart thud harder behind my ribs. I have to do it because I know there is no other lane free from such creeps; have to face it anyway.

I pulled down my dupatta so that it covered my bust; a chill crept down my spine as I remembered the last incident. As I leered my way through the darkness; I heard a bike coming from behind. And it stopped abruptly before me making me jolt backward.

“Where are you coming from? May I drop you till home, you know it is not safe to walk around alone for girls at this hour of the night.”

It was hardly seven in the evening. I tried walking away ignoring him. Because this was what I learned; if you want to avoid trouble, ignore them.

But when I thought I had left them behind the bike wheeled back towards me and as it rode past me the person on the back seat pulled my dupatta off my shoulders and drove away with it. His eyes were fixed on me, and he had the grin I would never forget.

For a fraction of second, I went numb. I could see my dupatta flapping as the bike took the last curve. I scurried towards my home. But it seems the night had not had enough of scaring me. My breathing almost stopped as I sensed someone following me. I turned around, and yes! There was a dark figure walking towards. I didn’t want any more of those blisters troubling me. I paced up my walk, but then he too seemed to be matching his steps with mine. I took the last curve to my home and began running as it came to my sight. I was almost there when I heard him call “Tia”…How on earth he knows my name. My shaky hands kept slipping off the gate handle. And when I finally got hold of it, I hurriedly pulled it open. But a hand placed over my shoulder left me frozen. I could hear him gasping for breath right behind me.

My eyes flooded as I saw my Dad stand there with his hand on my shoulder. “What took you so long? I had gone out looking for you.”

The lane is still there, as dark as ever. Those penetrating gaze trying their best to get a glimpse of our bare skin, are gone nowhere. We still walk through the darkness with weak knees and a pounding heart. The fear of being molested is never erased. The only difference is we have now learned to ignore them. We have now learned to live with this humiliation. 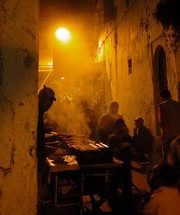 THAT DARK LANE. (Part One)