If you missed out on the previous part, please click here.

Beyond that barbed fence right in the middle of the massive land area stood an enormous mansion.

“This is huge!!” exclaimed Prerna amazed at what she was looking at. “I have heard so many stories on this, and finally it is today we get to unveil the truth.”

Sheena giving a satisfactory wink to her friend and took the lead pushing herself between the fence.

“We could take each floor, that will save us time. You chose…,” dusting her hands Sheena replied. “Which one?”

“Okay, I will take the first floor.” Contributed Prerna.

“I am okay with it….let’s get started,” Sheena announced with her hands clasped firm, as they both couldn’t wait to solve the mystery.

“No lock has ever been made that cannot be broken by Ms. Prerna Prasad” Prerna dramatically pulled out the bunch of keys she had brought along made both the girls giggle.

After a few minutes of struggle, the lock flung open. Sheena giving an appreciating nod walked in.

“What place is this?” Prerna blurted out. “gorgeous… isn’t it?” turning to Sheena she asked who stood there nodding speechless at the beauty that lay before her.

Despite the dust and the tottering wall paint, that place had not lost its majesty. Its pillars standing in the middle had a particular painting that took them to the ancient temples they had read about in their history book.

“Why would anyone leave such a place?” Prerna babbled as her eyes still scrutinized the beauty.

“I guess that’s what we are here for, to find out the truth behind all those stories? Now let’s get to work.” Reminding her partner of their mission Sheena got to action.

Sheena had finished exploring all three rooms and now she stood on the threshold of the fourth one. Like the rest of the rooms, this too was empty and filled with dust. ‘But what was that I saw the other day?’ she stood there reasoning the possibilities of that vanishing Silhouette, completely deaf to the footstep entering the secret backyard door in the far end.

Meanwhile, on the first floor, a stark naked girl lay lifeless exposing all the bruises and cuts covering her body.  For a second this sight Paralyzed Prerna unless her instinct pushed her to check whether the girl had life left in her. ‘Thank god, she is breathing. I must warn Sheena.’ She got up and ran out of that room to her friend, but on the way to the staircase she felt a hard blow on her head from behind and fell flat on the ground. The man holding the wooden block stood towering over her with his lewd eyes scanning every part of her body. Kneeling next to her, he first removed her glasses and rand his fingers from her cheeks, down to her neckline. He then suddenly grabbed her by her arms and dragged her into the room she had just left.

Disappointed on not finding any answer on the shadow Sheena began ascending the stairs. “crack” she looked down, it was the glasses of her friend. Her gut twisted as she picked up the broken frame. She picked up the wooden block from the nearby room and skulked her way searching for her friend…

Some hustling sound from the adjacent room caught her ears. She froze as she saw the nude girl unconscious from where she stood.  She looked further and there on the far corner of the room was a man struggling with something with his facing towards her.  She stretched, it was Prerna with all her clothes removed lay their unconscious. She was gagged with her own clothes, her hands were tied. And now he was in the hurry to tie her foot before she could gain her consciousness. Sheena quickly hid behind the door as the man stood up accomplishing his job. He then began moving towards the door, as he crossed the threshold, weapon in Sheena’s shaky hands accidentally hit the door, made the head before her turn. Without another thought, she swung it towards the man, ’thud’ he fell on the ground. Dropping the wood, her hands covered her mouth as she saw his face. Those sucked in cheeks, eyes sunk into the socket, was of the same lanky man who had released her from the barbed wire that evening.

She hurried back to the room to rescue her friend. But some movement down on the lawn caught her eyes, a closer look gave her a hazy view of a shadow stealing its way towards the building.

Sheena not knowing what to do totted around panicking. She had very little time with her. “Prerna…Prerna wakeup…” she gave a final whisper but nothing happened there and she gave a final try waking the other girl but there was no response from her either and she decided to walk out of there.

That was when Prerna gained her consciousness back; all she could see was her friend walking out of that room. ‘How could Sheena leave me here, like this?’ before this thoughts could sink in, she heard some heavy footsteps ascending towards her floor. For a fraction of second, she thought it to be her friend coming back to her rescue but as the steps were heard pacing up she knew it wasn’t that of her friend. She slowly dragged herself to behind the doors, as that was her only shield from this unknown treads.

On the other side of the wall, Prerna had pinned herself to, that man was trying his best to wake his friend. He again got up to check on the bruised girl, she was lying lifeless there. But before he could find Prerna’s hiding place the creaking of the gate below made him rush to the window. He panicked as he saw a bunch of men rushing towards the Building.

In the room her heart throbbing in her ribs, Prerna still sat there pinned to the wall.  A sheet of cloth covering her from the back startled her. It was Sheena her partner there finally for her rescue.

The psycho criminal brothers had been arrested from the forsaken villa last night. On further investigation, it was found that they were kidnapping girls from places and rape them to death. There has been found a freshly buried body of a girl in the back yard. Which has now been taken postmortem, but the bruises and the cuts have already revealed the amount of torture that little soul was made to go through. One brave move of calling out for help form that girl (her name to be kept hidden for safety reason) has saved two lives, but the mark in her mind can never be erased. The other victim is still unconscious and the police are waiting for her to regain consciousness to locate her family and hand her over to them.…… 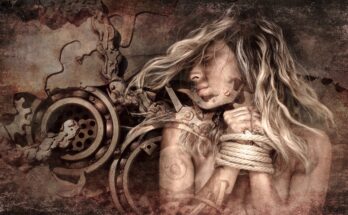 The Forsaken Villa: The Warning. 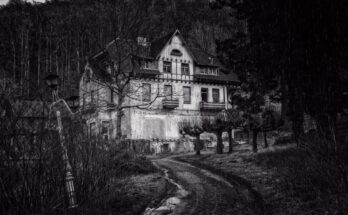 The Forsaken Villa: The silhouette.